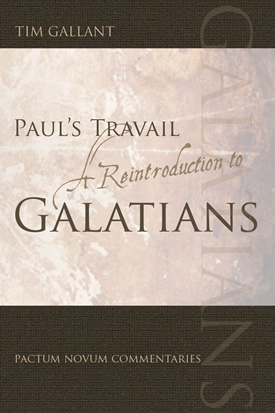 In one way or another, much of my life has revolved around Paul’s letter to the Galatians.

When I was a teenager, Galatians 2:20 became my favourite Bible verse.

Much later, back while I was an avid “theonomist” (think “Christian Reconstructionism”), it was Galatians that confronted me. I wrestled with how Paul could construct the letter the way he did if he really agreed with my position.

That wrestling ultimately led to a two credit hour independent study during my final year of seminary, supervised by my NT prof, Dr Nelson Kloosterman. The resulting paper was 110 pages, 1 1/2 spaced with 11 point type (actually, blockquotes were single-spaced with 10 pt), containing two parts: a verse-by-verse commentary on Galatians 3, and a brief synthesis of Paul’s view of the Mosaic law.

That work in turn led to a further-developed treatment of Paul’s view of the law, leading to the publication of my short book, These Are Two Covenants, within which Galatians played the largest role.

In the meantime, starting in 2006, I preached through the letter in my (then) home church, Christ Covenant Church of Grande Prairie. Some 35 sermons later, the series wrapped up in 2011.

So far as scholarly labours go, the culmination of my love for Galatians is the new commentary, Paul’s Travail: A Reintroduction to Galatians. While I still plan further, less technical, work based on Galatians, in many ways this is the climax of many years of study. I hope that it will provide many people with better understanding of this difficult but critically important letter of Paul.

For more information on Paul’s Travail, please visit this page on my publishing site:

One response to “Announcing … Paul’s Travail”